Last week, Forbes published an article titled Creative Ways For Micro Businesses To Give Back.

The article detailed my recent forays into charity food offs and the impact they can make.

And yes – a charity food off is exactly what it sounds like. My last one was the Chocolate Chip Cookie Off 2017, which had 27 professionals compete and over 3000 cookies! If you’re curious, I previously broke down How I got 27 pros to make cookies. And we ended up raising over $400,000 from the Cookie Offs!

This time I want to break down the thought process on the why. We’re gonna cover seemingly divergent areas, but it will all come together.

What do you think is philanthropy? 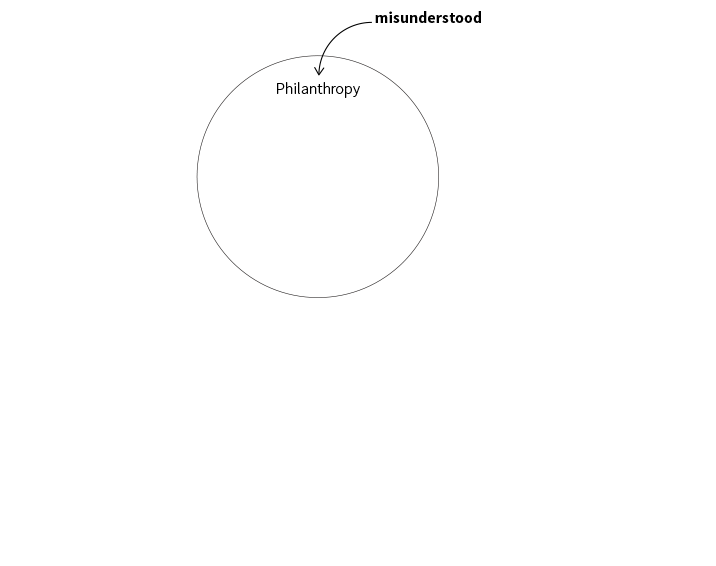 If I was to ask you what is philanthropy, what do you think of?

I asked a dozen friends of mine, and they all came up with a similar answer: “Something someone wealthy like Bill Gates or Warren Buffet does once they’ve made it.”

Instead of thinking of the act of philanthropy, people instead think of the people who practice philanthropy.

It’s also interesting that many people associate it with something you do once you’ve “made it,” but that’s a different existential topic to investigate.

By thinking it’s something only the wealthy do, we divorce ourselves from attempting any form of philanthropy. Instead, we place it upon some future version of us.

But what is philanthropy?

The actual definition of philanthropy:

“the desire to promote the welfare of others, expressed especially by the generous donation of money to good causes.”

The hang up for most people is the use of the word generous, and they mostly fixate on generous being a large absolute amount.

Being generous is relative, not absolute.

Here’s a simple truth: we can all be philanthropists. 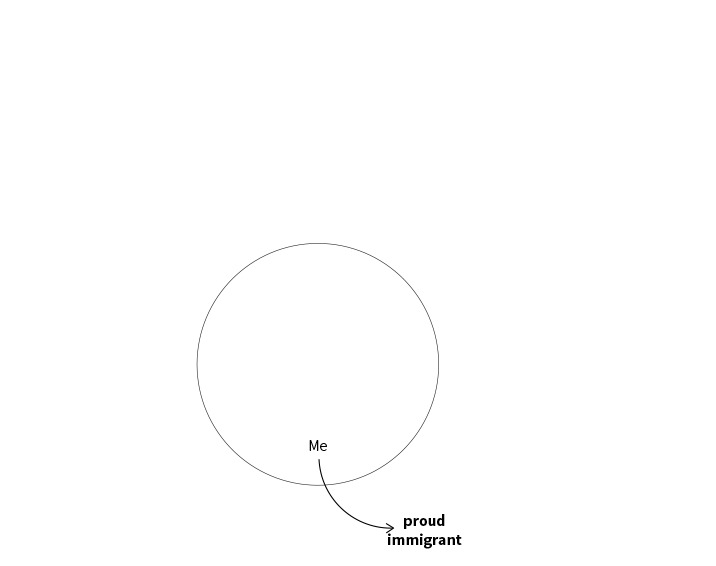 If you’ve ever listened to me talk about my back story, inevitably the fact that I’m an immigrant comes up. I am ethnically Kashmiri (which is what Pakistan and India keep fighting over), and I lived in Saudi Arabia, Japan, and Houston before immigrating to Canadia for high school.

I attribute 95% of any success I’ve had to the fact that my family immigrated. I have cousins in Pakistan and India who are smarter than I am, far harder working than I am, and immensely more strategic and savvy than I am…

And yet because I was born to the right set of humans, I’ve had 1000x more opportunities than any of them.

As such, I embrace living the immigrant dream. And to me,  living my life in a meaningful way means making a positive impact in my local community. 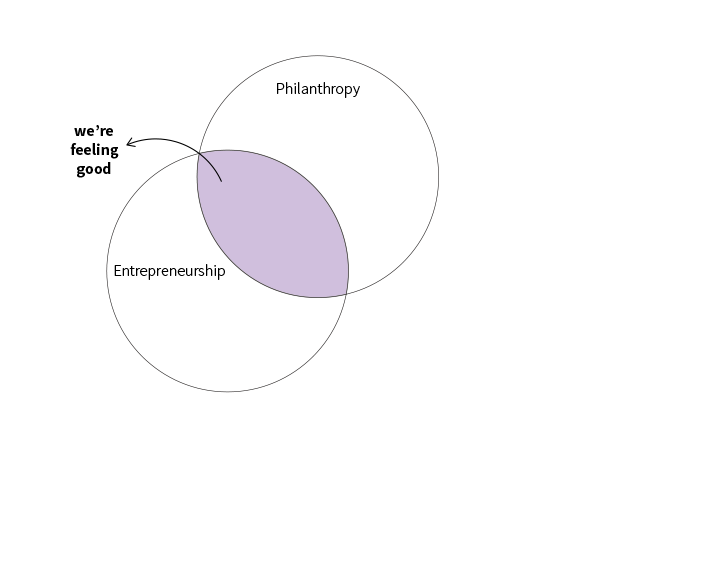 If you’ve hung out with me in the past few months, the chances are high that you’ve heard me natter on about the intersection of entrepreneurship and philanthropy.

To many entrepreneurs, philanthropy happens after you sell your business for $50 million, and then start cutting cheques of $100,000 or even $1,000,000 and shrug it off as NBD.

As we’ve become less obsessive over only chasing money, there are now quite a few lifestyle entrepreneurs who live comfortably. They may never get a $50 million payday, but they can afford to give $1000 a month or $5000 a year.

And these entrepreneurs are willing and happy to do so. The crux is that when it comes to their mind space, giving money away is at the bottom of their priorities; their attention is diverted towards other things.

It’s not that they are anti-giving – they simply have far more pressing issues. 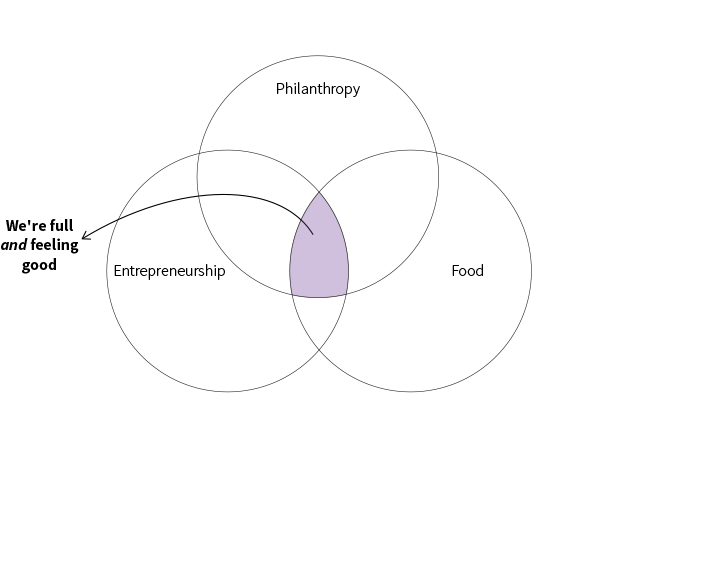 I love food. “Authentic,” fusion, fancy, grimy – as long as it’s yummy in my tummy, I’m ready to try.

A weird point of pride I have is many entrepreneurs, when they come to Toronto, ask me for my food recommendations (and I’ve had nary a complaint).

So when my friend Jayson Gaignard told me he had bought tickets to something called Chefs for Change, I immediately said yes.

Chefs for Change is a brilliant idea – bring in the top chefs in Toronto, have them create a four-course menu, and then sell 100 tickets (at $150 a pop) to this event.

I went with my woman, and we had a blast.

Talking with the chefs, talking with Nick Saul (the organizer), and talking with people who attended, it dawned on me that this was a win-win for everyone:

Leverage what you’re good at for what you want 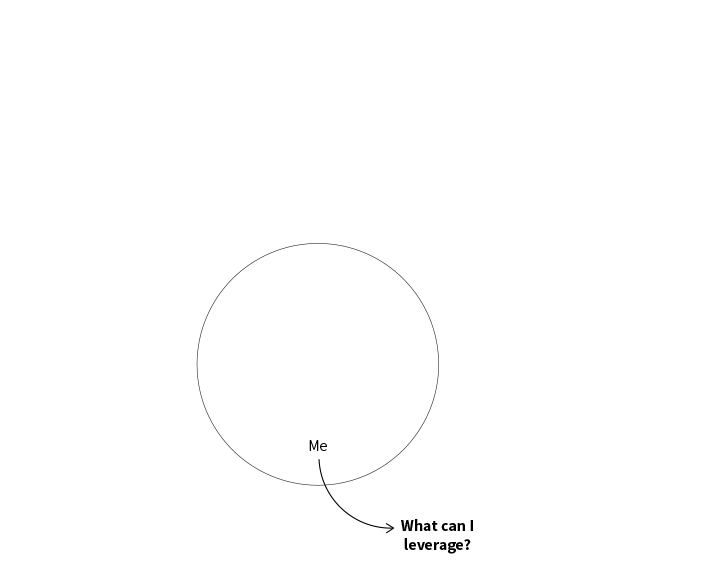 I’m a big fan of leverage.

To me, leverage is using my existing skills and capabilities to make things I want happen. Dinners, vacation, experiences… whatever.

That Forbes article I started off with happened because I had a good relationship with Elaine. So instead of having to do a cold pitch, we hopped on the phone, had a conversation, and she saw value in covering what was going on.

So as I thought about how I could leverage what I had (as per the Venn-diagram above), I came up with:

So how could I bring them all together?

Welcome to the Food Offs 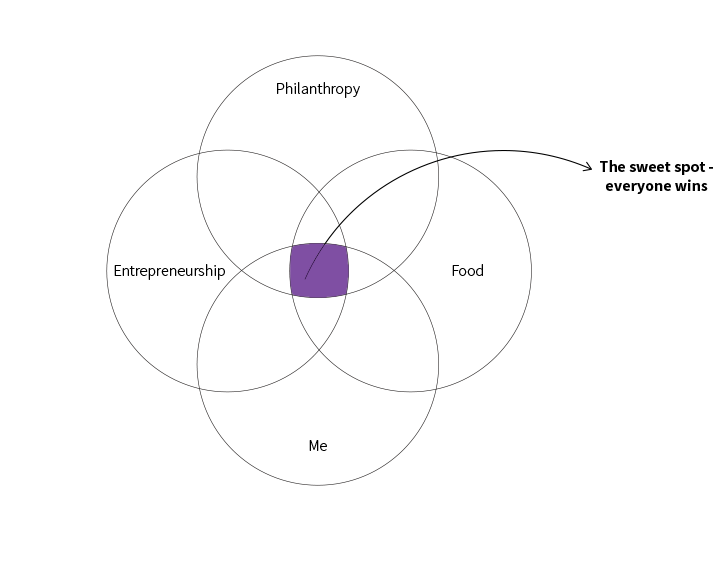 The Chocolate Chip Cookie Off 2017 (CCCO2017) was an experiment on many levels: if I could convince chefs to show up, if I could fill up the event space (I had never run an event before), if we could make it about charity, and more.

I had helped organize some random ones with my friends. Pie Palooza. Monster Mac N’ Cheese Off. An ice cream pub crawl. We were just leveling it up here.

I spent roughly $500 and spent about 60 hours organizing it and making it happen.

My upcoming Sausage Showdown is a natural evolution of the CCCO2017 and the levers I have.

All those points I listed in the above section? Lets break them down:

After the experience, I was so frustrated with everything that went wrong that I wrote down 27 things-to-be-fixed, and then wrote an eight-page operations playbook to ensure everything goes smoothly for the next one.

These 27 issues were tiny niggling details. Overall the event was a huge success, and it showed to competitors and ticket-buyers that I could pull this off.

This time, my base costs are jumping roughly $2000 to host the Sausage Showdown.

The ROI is there (more on that later).

I have a strong network of successful entrepreneurs

Because of my reputation (which I have spoken about before) and the CCCO2017, it was far easier for me to go to my fellow entrepreneurs and say “buy tickets to this event” and then have them buy it.

As I write this, we are 80% sold out with 2.5 months to go. About a dozen people are coming from outside of Toronto to come feast on sausages and expand their network!

Hell, we’re selling tickets through Universe.com (which Ticketmaster owns). My buddy Craig founded Universe and is waiving transaction fees. 100% of ticket revenue is going to charity.

The personal relationships I have built means chefs and butchers know that I’m doing this from a position of sincerity and that I’m not some scammer.

Introductions to other kickass chefs have become far easier (I often hear “Oh you’re the guy who did the crazy cookie thing”).

Having done CCCO2017, people know this is real.

The motivation (as it can be a grind at times) keeps me going because I know of the net positive effect the charity has.

Beyond just the abovementioned “grind,” this also means I stay on top of my friends and chefs/butchers to make sure everyone shows up 🙂

I am good at doing ridiculous things and convincing people to tag along (ahem, #cookielife)

And that’s how you end up with a Sausage Showdown – it hits multiple leverage points I can utilize. 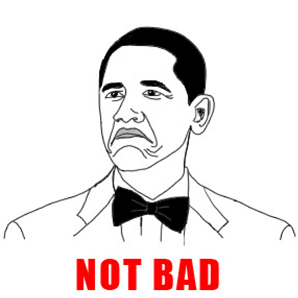 By leveraging my assets and skills, I get to host a sausage food off, bring in driven entrepreneurs to network and feast, AND raise 5x my dollar donation.

Best of all, this builds up your reputation 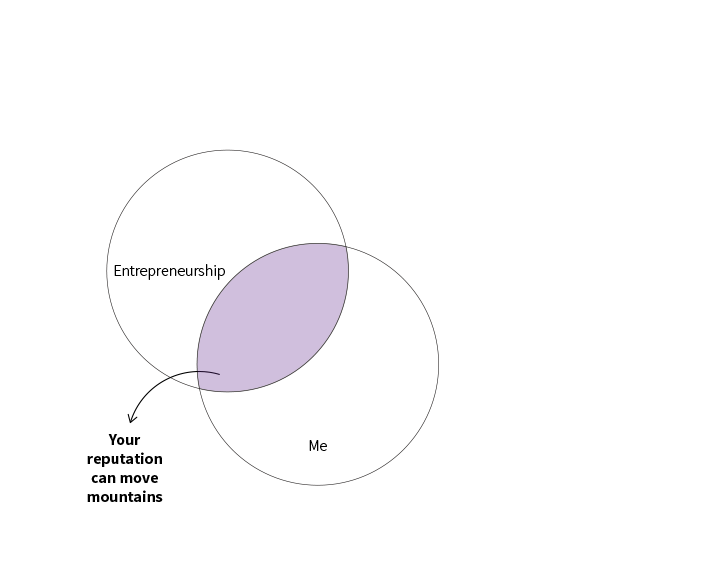 To bring back Jayson (who bought those 20 tickets for Chefs for Change), he found it (relatively) easy to sell those 20 tickets because of his reputation. It’s why the tickets were snapped up.

Everything becomes easier as your reputation grows.

People talk. In the past week alone, I’ve had two well-known individuals (one in fitness, one in internet marketing) reach out to me and start with a variant of “I know a lot of people who know you, and they all say you’re doing great and *interesting* things.”

Building your reputation makes it a lot easier to make things happen.

How are you leveraging your assets and skills? The real lesson here isn’t about donating to charity (though you should mull over it) or about expanding your network for the sake of networking or even about following your passions.

No… the real lesson is that I wanted to do something, and I did it.

Sure, I dipped my toe in it first (informal food offs with friends). Then I waded in deeper (Chocolate Chip Cookie Off 2017). And now I’m in the deep end (Sausage Showdown).

I wanted to do something, and I did it. I took a step back, looked at the assets and skills I had, leveraged them, and brought it all together.

There was no master plan. It was always meant to be – can we do this? And out of that I found meaning (charity!)

It’s easy to look at this ex post facto and go “duh it was going to work out” but before CCCO2017 I was wrought with fear and uncertainty.

I didn’t know if the bakers were gonna show up.

I didn’t know how many people were gonna show up.

A million things could have gone wrong (and a lot did go wrong during the event).

Didn’t matter. The failures were minuscule compared to the big success.

People come up to me all the time with their suggestions on how to do different kinds of food offs.

And I always have the same response: “you should do it.”

I am not being flippant; I say this with love. If I can do it, so can you. 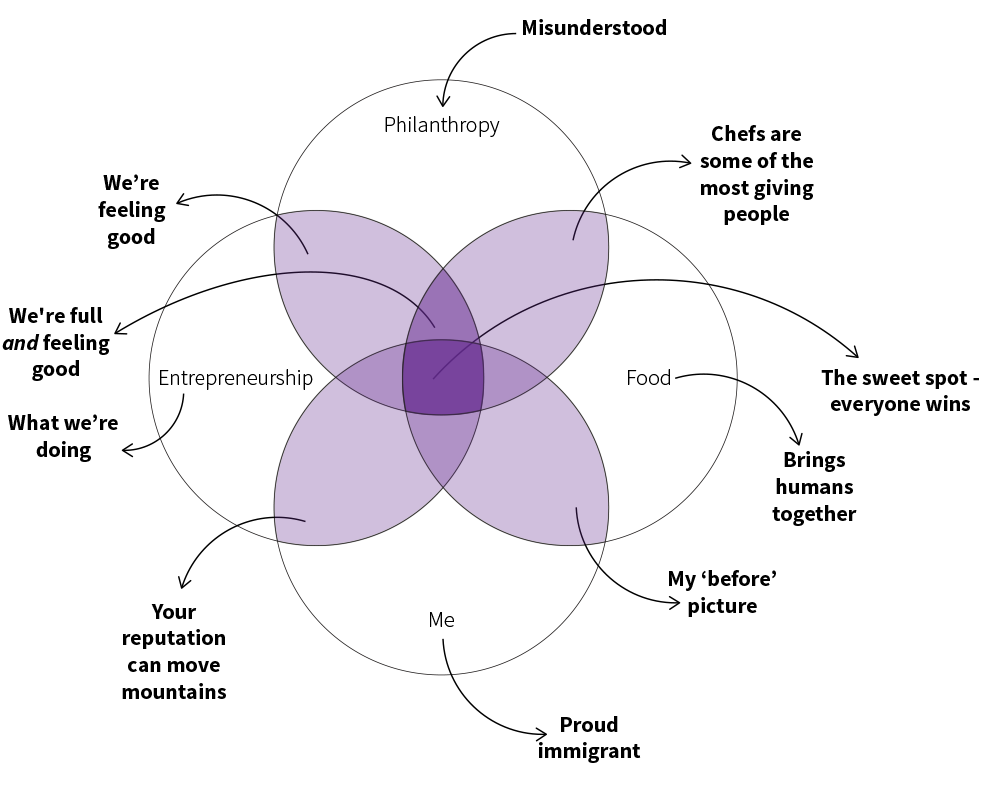 It’s about being a do-er, not a talk-er.

At the end of the day, I care about charity. Charities like CFCC and Second Harvest speak to me.

And so instead of trying to convince entrepreneurs to donate to those charities, I simply do it on their behalf by harnessing my assets and skills.

And so can you.