I’m an enormous fan of observing how successful people conduct themselves; there’s so much to learn from the patterns they display.

With that said, there is one downside: the rules are different for those who have achieved success. Not only that, those people are often entirely oblivious to the reality that the rules have changed.

Furthermore, many tend to romanticize the story of their success and forget the nitty-gritty steps they took to get there in the first place.

The view from the mountaintop is different than when at its base.

I wanted to point out three things that are often missed by people who have achieved success:

1. The rules are different

In April, Jayson Gaignard hosted a workshop on networking and relationships. One of the pieces of homework was to host a dinner and invite people you don’t know. The suggested plan of attack was to post it on FB and ask your friends to tag others.

Here’s [redacted] posting, someone with a robust existing network: 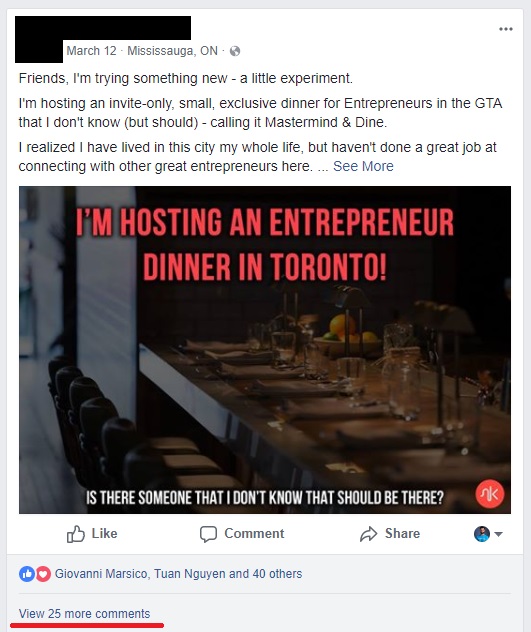 On the flip side, here’s [redacted] posting:

Even though [redacted] is incredibly successful (having created a business with over 100 employees), no one suggested anyone to him.

The rules are different.

In fact, I was originally writing an article on “how to become a hub by hosting dinners” when I realized that it’s incredibly easy for me to invite random people and get them to come out because I have established myself at this sort of stuff. It’s much harder when starting off (and it’s why I wrote this article).

Due to Examine.com, I already have the pedigree of a “successful business.”

Due to my love for food, I already know some underrated locations with delicious food or even locations not normally available (eg the Royal Canadian Military Institute and the Ice Cream Crawl).

Due to my wide network, I can easily get access to entrepreneurs.

Due to my reputation and having hosted dozens of dinners, I can hide the guest list and say “trust me.”

Due to reputation management, if you Google me, you find a ton of articles singing my praises.

Is that replicable by someone starting off? Of course not.

Someone like Ramit or Derek can make fun of some of the customer service emails they get and get away with it because they have built up a reputation for helping so many.

Try that when starting off and you come across as a dick.

Be aware that the rules and what is doable and even acceptable change when you have success and a reputation.

It always boggles my mind how people who got in early don’t realize what an advantage being a first-mover offers is. Increased competition over time can make the barrier to entry so much higher.

Most people don’t know this, but TripAdvisor was the most prolific text link buyer in the early 2000s. Sure their product was good, but buying those links is what let them dominate results in Google.

It is now impossible to do what TripAdvisor did. Back then Google didn’t even care about the context of the links; they just cared that the linking page had high PageRank. Try that now, and not only would the links be useless and ignored, but Google would likely ban you faster than you can say “hey I’m just copying TripAdvisor!”

This is true for many nascent industries. I know a fair number of domainers, and many of them think they’re geniuses for seeing the value of domains. They are oblivious to the reality that even being online in 1995 was a significant function of luck.

Social media is littered with people who utilized first-mover advantage. YouTube superstars. DJ Khaled rising to prominence because of SnapChat. And so forth.

I’m not saying you cannot break into any industry, but let’s be honest: having to compete with established brands makes life a lot tougher.

First movers often downplay how much being a loud voice in a quiet room helped make them one of the big dogs.

3. Your memory is fungible

I find studies on people’s memories to fascinating. How sights and sounds can trigger memories. How nostalgia can misrepresent reality. How people can staunchly believe there was a movie with Sinbad as a genie called Shazam… when it never existed.

One of the more interesting psychological revelations is that a painful experience is perceived as less painful if it was less intense at the end (the peak-end rule).

If you think of someone successful, you’re looking at someone who has finished a painful experience (attaining success); the reality of what they went through has faded. As such, their memory of the totality of the work that went in to be successful can be re-written in their mind as a less arduous journey. Instead, it’s replaced by the more emotional aspect, which is often self-perceived as “I put in a lot of hard work.”

It’s easy to throw out platitudes when the majority of the challenging work is done. It’s also a lot less painful starting from $3 million than $0, but hey, “just hustle and you’ll make it.”

Our memories remember the peak and end of a painful experience; once you’re through it, you’re more likely to remember it from an emotional perspective, which can heavily skew the reality of what happened.

4. You and I ain’t the same – get to the underlying truth

There’s an enormous difference between aping someone and being inspired by someone.

Too many people see someone good at X and think it’s the only way.

For example, you may see a guy aggressively hit on a lady and think: “ahh, I just gotta be aggressive.”

You may then see a guy play it cool, and think: ahh, “I just gotta be relaxed and play it cool.”

The underlying truth is that both were confident.

You confused their manifestation of confidence (one being aggressive, one being relaxed) with the truth (they were comfortable in their skin).

That’s what I mean when I say don’t ape someone else. If you’re looking for patterns, don’t imitate what they’re doing; understand what they are doing, why they are doing it, and how you can apply the why to yourself.

Don’t copy what someone is doing. You need to dig deep and understand what makes them do it in the first place.

I’m a huge fan of experience. I love learning from others. But I also spend a lot of time trying to understand the underlying truth of what makes something work.

There’s a lot to learn from others (Justin Jackson has written something similar about not following your heroes).

You can learn a lot from others’ experiences… it’s important to slice and dice that knowledge to ascertain the underlying truths and then apply those truths to the person that you are.

I spend time thinking on how I've achieved success

Learn from my experience.

Leave behind the unqualified gurus who have never done it themselves. Leave the hacks for other hacks. Join the SJO Fam for real-life experienced advice and thoughts.